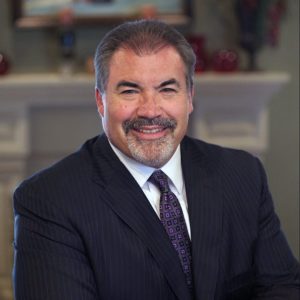 Blair is a former college All Star at Oklahoma State University blocking for future Hall of Famer, Thurman Thomas.  After college, he was drafted by the Chicago Bears in 1986 playing under Coach Mike Ditka and alongside Hall of Famers Walter Payton, Dan Hampton and Mike Singletary.  Blair’s career was cut short by a fourth and final knee surgery after a five-year NFL career.

At the age of 26, Blair made certain of his commitment to Jesus Christ as Savior and Lord.  At the age of 37, he was called into full time ministry.  His passion is proclaiming the truth of the saving grace of Jesus Christ, make disciples and culturally to restore Godly morality and decency in America.

In 2008, Pastor Blair was one of the original 33 pastors that worked with the Alliance Defense Fund on “Pulpit Freedom Sunday” challenging the IRS and the constitutionality of the 1954 Johnson Amendment.  The number of pastors participating increased every year since with over 1600 participating in 2012.  Following the 2012 Pulpit Freedom Sunday, the IRS admitted that churches are tax exempt anyway and do not require approval or a letter of exemption from the IRS.  In the 2017 Tax Law, the Johnson Amendment was stricken by Executive Order as it relates to churches.

In 2008, Pastor Blair was named Pastor of the Year for the State of Oklahoma by the Bott Radio Network.  In 2011, Pastor Blair was named National Pastor of the Year by Vision America at the Westin Galleria in Houston.  In 2013, Pastor Blair received the James Caldwell Award from the Oklahoma Second Amendment Association. Pastor Blair has been a featured guest on the Glenn Beck Television Show, the Glenn Beck Radio Show, AFA Radio, the Mike Gallagher Radio Show, Focus on the Family Radio, The Rest of the Story with Dick Bott, Washington Watch with Tony Perkins and Faith 2 Action with Janet Porter.  Pastor Blair and Fairview Baptist Church’s radio ministry, Exploring the Word, airs weekdays at 3:00 PM on Bott Radio across the state of Oklahoma.   In 2015, Exploring the Word was given the “Excellence in Broadcasting Award” from the Bott Radio Network.

In addition to his ministry responsibilities at Fairview Baptist, Pastor Blair preaches around the country and speaks on subjects including Apologetics, Biblical Worldview, Islam, Biblical Principles of American Civil Government and America’s Christian Heritage.  In 2015, Pastor Blair shared the platform with David Jeremiah, Ollie North and Mike Huckabee in the Real Evangelism Conferences sponsored by Bailey Smith Ministries.

Pastor Blair serves on the Board of Directors for Bott Radio in Oklahoma and the Oklahoma Apologetics Alliance.  Blair is also a member of the Council for National Policy.   Blair has been married to Cindy for 29 years.  They have